Two ferries and two patchy sleeps later we were on Pender. Now most people who have just bought a house without ever having set foot in it would be quite anxious to see what they have bought, but we are a little bit different. First priority was the Pender Island Bakery Cafe. Our boys love the sausage rolls, I love the pies and my daughters love the muffins. Isn’t it funny how a steak and ale pie can be top priority? So we loaded up on yummy bakery goods, filled up with gas as we were on empty (this seems to be a normal occurence when we arrive on Pender), and set off to see the house.

A quiet and tree-lined road leads to the house.

The house was in an area that we really had not explored. It was a quiet area at the end of a quiet rural road with houses tucked behind the trees. Very pretty. This was a good start. As we drove we debated whether the house was on the left or the right, we couldn’t tell from Google Earth, luckily we spotted our realtor’s car and we had found the place.

The good news was the house was actually there. So that was a pretty good start.

The house was tucked away nicely behind trees and the fence. The entry was through a cute gate with heart cut outs.

Our realtor showed us around the house and it was pretty much what we expected…….ish. The rooms were what we expected, the layout was what we expected. What was a surprise was the smell and the stuff. Let’s just say the previous owner had only kind of moved out. They had left behind  furniture, both operational (if you are into a 1970’s sort of vibe) and not. We were also blessed with nick-nacks, ugly lamps, a stuffed turkey, an ornamental wasp nest and a whole selection of books some that were a bit dodgy to say the least. Now let me give all my readers a tip here, when you move houses please make sure that if you are leaving books behind that the illustrations are suitable for children and aren’t the sort of book to be hidden under the bed of a 14-year-old boy. Ah ha! Now you are getting the picture (bad word choice, I know!) of what was left behind. For the record, my 14-year-old boy did not hide the books under his bed, I found them first.

So here we are with a house full of “stuff”. “Our” furniture is all stored away in a corner of the master bedroom and we have nowhere to put it because of the items left behind. The house smells bad; very, very bad. We have pheasant wall paper in the family room, but this I knew about. So what next? It was 4 p.m., we decided to head to the hardware store. We made a list: wall paper stripper (goodbye pheasants!), cleaning products in every form possible, paint and brushes. I could either walk around repeating “What a smell…look at all this “stuff”!” or do something about it. We had to do something about it.

Back from the hardware store we had to come up with a plan for the stuff. We first started moving large pieces to the shed, but after moving a few items we realized there was well more than the shed could hold plus we thought “Why should we store this stuff?”. The next plan was to move everything into another part of the master bedroom as it was quite large. We started moving the items and the piles started growing and growing and growing. Some items went directly outside; the carpets, the curtains, items that really were smelly. What a project. We realized this was a bigger issue than we could handle, the stuff was not part of the deal, so we called our realtor. 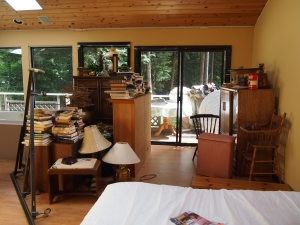 Partial collection of items left behind.

Our realtor was really, really good about it. He said he would sort it out, it would take a few days. In the mean time we had to sort out the smell. We scrubbed and we scrubbed. The room I was most concerned about was the loft where our children were sleeping. Dirt, grime, and old cigarette smoked poured down the walls as I scrubbed. It was bad. We had no choice but to scrub the whole area top to bottom, over and over, to make it a reasonably clean space for our children.

The next project was the family room. The pheasants had to go. Luckily the border of pheasants stripped off the wall like a dream. Unfortunately my wall paper stripping luck did not last. The rest of this room, complete with vaulted ceilings was wall papered in a 1980’s cottage-y print. I decided to tackle the wall paper. The first strip came off a little rough; I decided I needed to use more wall paper stripper and let it soak in a little longer. The second strip came off no better. Now I had a big rough area of half-stripped off wall paper. I worked on it some more and then I realized the problem….they had wallpapered over raw drywall. Brilliant. The next three days were a series of filling, sanding and painting over the wallpaper. In the end it looks quite nice. Unfortunately between the smell and the stuff and the wallpaper issue I forgot to take any “before” pictures. The situation was clearly a bit overwhelming.

A few days went by and our realtor had a plan for the “stuff”. He showed up with his wife,  a co-worker and truck and they filled the truck, load after load, until everything was gone. Amazing. We were so grateful. They also told us to put the big items by the road with a “free” sign on them and give it a couple of days. No kidding, all except two of the big items (a broken computer desk and a broken t.v.) went; we couldn’t believe it.

We still had a lot to do, but at least the “stuff” was gone.